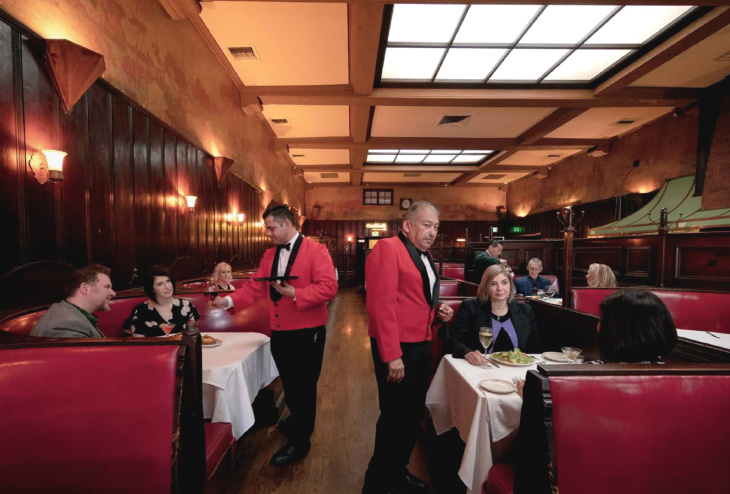 “It feels like a slap in the face,” Bret Thompson says.

He and his wife, Lucy Thompson Ramirez, own Pez Cantina, a seafood-focused Mexican spot in Bunker Hill. In mid-March, when it became apparent the coronavirus pandemic would force them to either close the restaurant entirely or remain open only for takeout and delivery, Thompson called his insurance company.

He had what he describes as a disheartening, two-minute conversation with an agent from Travelers Indemnity Co.

“He kind of got on the phone with me like, ‘Okay, I’ll hear you out but you know you’re going to get denied,'” Thompson says. The agent asked questions, listened to Thompson’s answers then, “turned around and said, ‘We are denying your claim.'”

It felt like a betrayal, so Thompson decided to sue.

“You’re giving these guys money every single month,” Thompson says. “To do what? To insure you for things that could happen to your restaurant. And then when it does happen, in the most horrific way possible, [you get] zero, nothing, no help at all.”

He is among a growing number of restaurateurs going to court to try to get insurers to make good on expectations.

Musso & Frank, one of Los Angeles’s oldest (and most old-school) joints, is suing its insurance company. So is Encino restaurant Scratch Bar & Kitchen, which also has a Montecito location. In Northern California, French Laundry chef and owner Thomas Keller filed suit against his insurance company. These restaurants are the tip of the spear.

Around Southern California — and the rest of the United States — restaurants (and other businesses) are suing insurers for denying coronavirus-related business interruption claims. Most people expect the trickle of lawsuits to become a torrent.

“At this point, I have over 150 either clients or businesses that have contacted me about this,” says lawyer Brian Kabateck, who’s representing both Pez Cantina and Scratch Bar in their suits. His downtown L.A. firm, Kabateck LLP, has also filed or is preparing to file suits on behalf of restaurants in Texas and Chicago.

We reached out to Travelers Indemnity about the Pez Cantina lawsuit. The company sent the following statement and pointed readers to additional info on its website:

“We recognize that the spread of COVID-19 has affected many of us in ways we never could have expected, and we are taking many steps to support our customers, agents, brokers and communities during this difficult time. In our standard commercial property policies that include business interruption coverage, we have very specific exclusions stating that losses resulting from a virus or bacteria are not covered.”

For restaurateurs, it’s a desperate race to get the money they believe they’re owed before their businesses collapse.

The Devil Is In The Details

Although the lawsuits these restaurants have filed against their insurers differ in the details, they share similar DNA.

If you want to try to understand insurance policies — dense, eye-peelingly boring documents that typically run to the hundreds of pages — start by looking at their exclusion clauses. That’s a fancy way of saying “stuff that isn’t covered.”

Most insurance companies that have denied coronavirus-related claims have cited a few reasons.

The first is what’s known as a virus exclusion clause. Some policies, like the one Musso & Frank has with Mitsui Sumitomo Insurance USA, state the company “will not pay for loss or damage caused by or resulting from any virus, bacterium or other micro-organism that induces or is capable of inducing physical distress, illness or disease.”

In other cases, insurance companies have denied claims because they say businesses that were forced by state or local authorities to shut down, didn’t suffer any physical damage.

Finally, some insurance policies have force majeure clauses, industry lingo for “acts of God.” They typically get insurers off the hook for damages sustained in crazy, random events such as wars, explosions, acts of terrorism, severe weather events and, in some cases, epidemics.

“This is not something anyone’s ever going to admit to but insurance companies write their contracts so that you can argue either side of the issue,” Baer says. “Why? Because it’s a very complicated, specialized area and the unwritten rule is he who yells the loudest gets paid.”

Let’s say you’re running a restaurant and one day, government officials, in an attempt to stop a potentially deadly virus from spreading, issue an order requiring most businesses to close.

Now, you have a battle between competing clauses.

“You’ve hit the point where the rubber meets the road,” says lawyer Michael J. Bidart, who’s representing Musso & Frank in their suit against Mitsui Sumitomo. “Like many things in life, it’s not always the presence of one peril [that] produces a loss.”

What, precisely, caused the interruption to these businesses: Was it the virus itself or the stay-at-home orders? This will likely be one of the major points of contention between insurers and the restaurants whose claims they have denied.

For John Echeverria, whose family owns and runs Musso & Frank, the answer is clear.

“The reason we got shut down is because the government ordered us to,” he says. “We didn’t have coronavirus in the restaurant. To me, it’s just an excuse by the insurance industry to not pay out on valid claims.” Echeverria also happens to be a lawyer.

Insurers will probably see it differently. We reached out to Mitsui Sumitomo about the Musso & Frank lawsuit and a representative said the company “does not comment on pending litigation matters.”

Ultimately, the courts will decide whose interpretation is correct but Kabateck is optimistic about his clients’ chances. Pez Cantina, like Musso & Frank, has a virus exclusion clause in its policy.

“There could be two causes of a loss — one’s covered, one’s not covered — and the courts in California are very good to policy holders. They say if there’s two causes like that, the tie goes to the policy holder. I think that’s one of the arguments that’s going to win here for an awful lot of people,” Kabateck says.

A Matter Of Interpretation

Then there’s the issue of what, exactly, constitutes damage.

Musso & Frank’s policy, like many others, provides coverage that pays for the loss of business income “due to the necessary ‘suspension’ of your ‘operations'” but “the ‘suspension’ must be caused by direct physical loss of or damage to property at premises.”

In the denial letter Mitsui Sumitomo sent to Musso & Frank, the insurer writes:

“Based on the information provided to date, it does not appear that COVID-19 caused ‘direct physical loss of or damage’ to insured property. MSI, therefore, respectfully reserves the right to deny coverage for the Claim on this basis.”

What exactly constitutes a “direct physical loss”? “A very good question and one which will be central to virtually all of these cases around the country,” Bidart says.

Once again, it will be a matter for the courts to decide.

Insurance companies try to consider every possible permutation of every scenario as they construct lengthy contracts that expose them to as little risk as possible. Silica dust. Trade sanctions. Burst pipes. Cyber security breaches. But a once-in-a-century pandemic? Up to now, that hasn’t been explicitly mentioned in most insurance policies. Baer thinks that will change. It will have to.

“If everyone that has business interruption insurance goes to the insurance companies and asks for complete coverage because of this pandemic, the insurance industry would go out of business,” he says. “So the government is going to have to step in and make some tough decisions to help people out because it’s not as simple as just saying, ‘You get coverage.'”

The National Association of Insurance Commissioners posted a statement on its website that reads, in part:

“Business interruption policies were generally not designed or priced to provide coverage against communicable diseases, such as COVID-19 and therefore include exclusions for that risk… If insurance companies are required to cover such claims, such an action would create substantial solvency risks for the sector, significantly undermine the ability of insurers to pay other types of claims, and potentially exacerbate the negative financial and economic impacts the country is currently experiencing.”

Baer isn’t the only one who thinks coronavirus-related will change the way business insurance policies are written and potentially set new legal precedents.

With much of the country’s legal apparatus shut down and California’s stay-at-home orders still in place, what’s a small business owner to do?

Whatever they can. Thompson says Pez Cantina plans to reopen on May 4 for takeout and delivery. Musso & Frank, which has never done takeout and doesn’t have the kind of menu that lends itself to such, received a PPP loan. Between that and the owners’ cash reserves, they have managed to keep all 84 employees (everyone except the owners) on the payroll. The Echeverrias are working hard to preserve the hundred-year-old institution.

“Over the hundred years of the restaurant, we have gone through the Spanish flu epidemic, Prohibition, the Great Depression, World War II and the crash in 2008,” Echeverria says. “We’ll get through this too. It’s just an issue of how.”